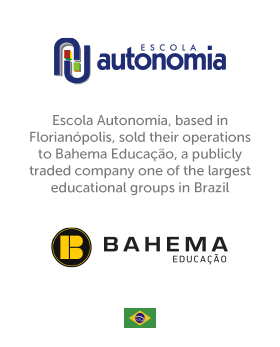 In 1991, a group of teachers founded Escola Autonomia, in Florianópolis (SC), aiming to build a differentiated and attractive institution for students, with humanist principles and creative pedagogical proposals.

Currently, the school serves children from high school to high school and brings with it two important projects: the Technology and Communication Center, which reaffirms its commitment to innovation in educational processes, and the Transdisciplinary Project, which consolidates the approach aimed at building values . The school invests in the challenges for an updated and environmental education.

With an educational proposal based on constant reflection of what is vanguard in the Education area, ensured by the continuous qualification of its professionals, Autonomia works to develop the creative, constructive and collective thinking of its students.

Founded in Bahia in 1953 by Afranio Affonso Fereira, the Bahema group stood out in the national market as a company for the sale of agricultural implements. In the 1980s, encouraged by the then Financial Director Guilherme Affonso Ferreira, the company started investing in stakes in publicly traded companies and traded on the stock exchange, which ended up becoming Bahema's main business. Cases such as Unibanco, Manah and Metal Leve, among others, generated exceptional returns, exceeding 50% per year.

In 2016, with the approval of the Board of Directors, a new board of Bahema takes over the company and begins to analyze investment opportunities in Basic Education. In 2017, the first participations in the sector appeared: Escola Balão Vermelho / Colégio Mangabeiras, in Belo Horizonte / MG, Escola Parque, in Rio de Janeiro / RJ and Escola da Vila, in São Paulo / SP.

Still in 2017, Bahema starts to invest and becomes a partner at Escola Mais. In 2018, the company performs a collaboration with Escola Viva (São Paulo / SP), acquired by Bahema in 2020. Still in 2018, it creates the group “Critique”, which promotes the exchange of good practices and fosters the production of knowledge among the schools.

In 2019, Bahema becomes a partner at Centro Educacional Viva, in Recreio dos Bandeirantes, in Rio de Janeiro / RJ, and announces the acquisition of the Cultural Forum, in Niterói / RJ.

Colégio BIS, in the South Zone of São Paulo / SP, begins to compose the core of schools in Bahema in October, being the first bilingual institution of the group. In addition to BIS, Colégio Apoio, a socio-constructivist institution in Recife / PE, begins to integrate the schools of Bahema Educação and the Critique group.

With this acquisition, the Bahema Group marks its entry into Santa Catarina and southern Brazil.